Something happened during a four mile run with Cricket on Saturday.  It may be difficult to explain it in words, but I’ll try.  I doubt Cricket even knows about this moment but it was quite special.

When I decided to try to turn this running with shelter dogs idea into a real program, I knew it was a good idea.  However, as with anything, there are always those moments where you question if it’s worth it.  Will it fail?  Is it feasible?  Should I just jump ship now?

Any tiny fraction of doubt I had lurking in the back of my mind was instantly erased during this moment Saturday morning.

It is worth it, every single second invested into making this work is worth it.

What happened?  It was the magic of the mile.

It happened a little under 2 miles into our run at the rail trail.  Runners may relate to magic of the mile.  It’s that sweet spot, that sense of euphoria and joy we yearn for.  The runner’s high.  Those moments where suddenly everything feels right in the world, we can solve life’s problems, release our stresses and relax.  That moment where we feel like we can run forever and our bodies move in effortless motion.

My run with Cricket started a little shaky but suddenly under two miles into it, I looked to my left and saw a focused dog moving in perfect pace beside me.  Her breathing was relaxed and for the first time of the morning, she seemed calm and at peace.  Cricket hit the magic of the mile.

When I picked Cricket up to take her to the rail trail, she hopped back and forth all over the car during our short drive.  She pawed at me.  She turned on the hazard lights with her paw during her attempt to touch every inch of the interior of the car.  I couldn’t be angry with her.  She’s a young, energetic dog who has spent too much time in an animal shelter setting without enough daily vigorous exercise.

We got to the rail trail and started walking.  She zig-zagged back and forth and each breath was labored since she was pulling and choking herself on the leash.  I started to jog.  A biker headed towards us so I stepped off the trail to let him pass and Cricket wanted to chase him.  Her energy seemed endless. 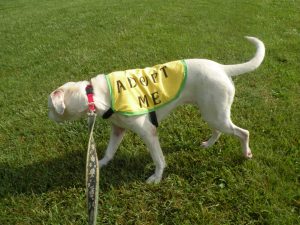 We continued on and she started to get into a rhythm but it wasn’t perfect.  We passed a few people and two dogs.  She did well with each but I wouldn’t say we were in complete harmony yet.

But, soon enough, it happened.  We hit that magic point.  I looked over at her focused intently on the task at hand, smiled to myself and continued on the path.  I knew we hit that magical point.

It was a muggy morning and around three miles, I could tell she was starting to tire a bit.  We slowed down and finished up the day with four miles.  That magic spot may not last long but it was enough.  It was a point she probably never would have reached on just a walk alone.

After getting some water and a few photos, it was time to head back to the shelter.

That dog that hopped all over the car for the ride to the rail trail?  This was her on the way back.  Calm, cool and collected the entire way.

Running with a shelter dog.  Worth it.  Adopting one.  Even more worth it.

9 thoughts on “The Magic of the Mile”